Andrew Coyne says the Bank of Canada has abandoned its policy of targeting inflation, allowing prices to increase in order to accommodate a lower Canadian dollar. Coyne says that this new policy objective is the result of direct interference from the Federal Finance Minister. I think that’s ridiculous. Let’s discuss.

To start, nowhere in the Bank’s recent Monetary Policy Report or in Poloz’s public statements is there any mention of a desire to see a lower dollar. Indeed, the day after Flaherty’s irresponsible comments, the governor went out of his way in an interview with CBC to say that the Bank does not care about the exchange rate. And many, many times, in every publication and news release, the Bank has said over and over again that it only cares about inflation. That has been true for years and it has not changed under Poloz. Poloz is in fact the first governor to describe the inflation target as “sacrosanct.” All monetary policy at the Bank of Canada is viewed through the lens of inflation. If you don’t understand this, you will not understand the Bank of Canada.

But those commitments are just words. What has actually happened — is inflation staying on target? Coyne says that inflation is currently not that far below target and that the dovish language in this week’s policy announcement was thus unwarranted to maintain the Bank’s target. But that’s not true. To see, you just need to graph it: 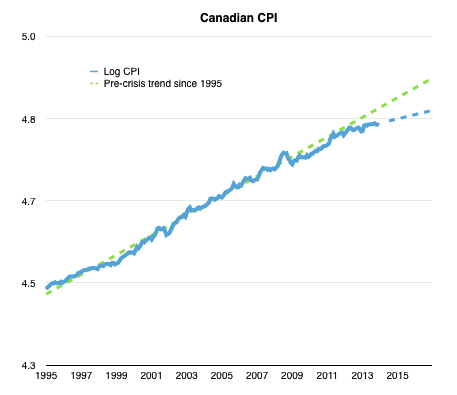 (The Bank says that it targets the inflation level and not the path of CPI above, but never mind that. If you don’t believe me, think of the Bank as targeting the slope of the graph above and the argument still holds.)

But Coyne’s tirade does raise an important issue: Does the Bank of Canada have a communication problem? Is Coyne some crank pundit trying to sell a headline or should his complaints be taken seriously? I don’t know. (Coyne’s father was governor of the Bank of Canada many decades ago and was instrumental in establishing central bank independence, but I don’t think intellectual authority can be inherited.) Though Coyne emphasizes interference by the Federal Finance minister, several other news agencies also reported this week that the Bank of Canada is attempting to devalue the Canadian dollar — it’s just not true.

Many people think that the Bank of Canada works by adjusting interest rates, but that’s not actually true. In fact, in the policy rate announcement this week that Coyne has taken issue with, there was actually no change in the policy rate whatsoever. The dirty secret of monetary policy is that the real tool is in communication, for reasons we won’t get into right now. If the Bank is failing to communicate its objective, if its credibility is in jeopardy, the Bank of Canada has a serious problem.