Recently I published a simple framework to explain disruption from above. The framework depends on measuring innovation using affordability instead of performance (the measure classically used in Christensen low-end disruption). In that post, I claimed that the iPhone can be viewed as a high-end disruptor to iPods. However, to be a high-end disruptor, the iPhone must have become cheaper than iPods over time, and many people have pointed out that they have not. Something similar could be said about PC’s disrupting typewriters from above.

I stand by my claim, however, because the price of the iPhone has fallen — dramatically, in fact. Let me explain.

Remember, when thinking about disruptions, we have to think in the realm of the job-to-be-done. So the first question we need to ask is: What job-to-be-done did the iPhone disrupt? Well it disrupted many, actually. Many. 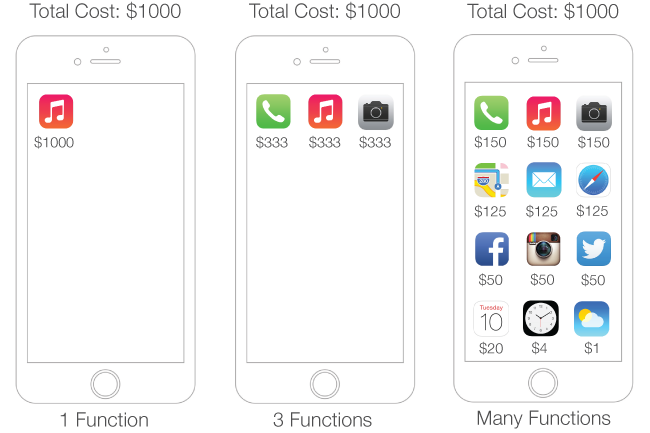 In relation to the iPod, the iPhone disrupted the job of personal mobile music. Think back to 2007 when the iPhone was introduced. If you bought an iPhone ($1000) simply as a replacement for an iPod ($400), it would have been a very expensive iPod. However, if you bought an iPhone as a replacement for an iPod and a feature phone, the cost for the iPod function would only be $500 (the other $500 allocated to the phone function). That’s still more expensive than the stand-alone iPod cost, but that’s just the start. Now add in the iPhone’s function as a digital camera and the cost of each function drops even further to $333. Now add in the functions of a GPS, mobile browser, email device, calendar/scheduler, alarm clock and all of the millions of apps in the App Store. As functionality extends, the price of each function falls drastically. In fact, for most current iPhone users, the cost of their iPod is $0, since they would have likely still purchased their iPhone without the music app. And this applies to nearly all of the iPhone’s other functions. The iPhone is the ultimate high-end disruptor.

But the iPhone is also a low-end disruptor if looked at from the right point of view. Imagine a user that needs only one specialized function of an iPhone. For example, a documentary film-team might purchase an iPhone simply for its video camera function. From the view of professional film-makers, the iPhone is a very low-performing, inexpensive video recorder. But the video function is much better than it was in 2007, and it is getting better every day. Just last week, the TV series Modern Family aired an episode shot entirely with the iPhone. This is classic low-end disruption.

It is thus difficult to analyze the iPhone as a low-end and high-end disruptor because of its diverse functionality — it just does so many things. As functionality extends, the price of each function falls. At the same time, the performance of each function is constantly improving. The iPhone has so much functionality and is constantly improving that it disrupts everything, from multiple angles. The same thing can be said of PC’s decades ago, and explains why PC’s were eventually preferred over typewriters for even the most cost-conscious consumers. And it is likely that we will see a similar phenomenon play out with the Apple Watch.

Extending functionality doesn’t mean better performing functions, necessarily, it means more functions to solve more jobs. This is why I do not subscribe the theory of new-market disruption, which I think is just another misclassification like Ben Thomson’s obsoletion. Instead, you can think of the term new-market disruption as describing a product that disrupts several jobs-to-be-done, from both the low- and high-end, by extending functionality and improving performance.