Bitcoin has become an intense area of interest of mine as it overlaps several of my main interests: mathematics, monetary economics, technology, innovation. The more I learn about Bitcoin, the more I see how wrong the popular press presents it. To discuss and explore Bitcoin from a monetary economics perspective, we first need to understand what Bitcoin is because so few economists seem to know. The purpose of this post is to explain the Bitcoin protocol in a less technical format so that ordinary economists can understand how it applies to economic theory.

Bitcoin is merely a protocol. A set of rules. The protocol tells us how to assign ownership of bits of information without duplication — these bits are called bitcoins. As in other sources, I refer to the protocol as Bitcoin (with a capital B) and the units of currency as bitcoins (lowercase).

The Bitcoin protocol consists of two main components: a ledger and a network. The ledger, also called the blockchain, records all transactions that use the protocol. Copies of this ledger are stored on computers that comprise the network. Any computer can be part of the Bitcoin network, it just has to be set it up for such. If two people want to enter a transaction of bitcoins, they simply have to record their transaction on the ledger. To do this, they announce the transaction to the network, and each computer within the network records the transaction on their respective copy of the ledger. The ledger will identify the two people using their Bitcoin addresses, which you can think of as a Bitcoin account number. It is very easy and costless to create a Bitcoin address, and you don’t need anyone’s permission. 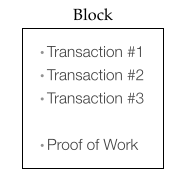 Now why would anyone donate their computers towards the network to solve these equations for someone else’s transaction? Because the first computer to process a block is given a block reward of new bitcoins — this reward is built right into the Bitcoin protocol and is called mining. Every bitcoin in existence is created by mining — there is no way to remove it. The number of bitcoins rewarded for processing a transaction reduces over time and converges to (but never reaches) zero. By this construction, there will never be more than 21 million bitcoins ever in existence, making bitcoins scarce. This rate of reduction is arbitrary, however, and the block reward can actually be adjusted to any value that the network collectively agrees upon. This fact will be very important if/when central banks choose to issue their own crypto-currencies. (Although many proponents of Bitcoin cite the built-in scarcity as a key strength of it as a currency, it is actually a fatal obstacle to it ever becoming real money.)

So how can you acquire bitcoins? Like I said, you have to mine them by donating your computer to the network to process blocks. The more computing power you donate to the network, the more bitcoins you are likely to be rewarded. So if you want a lot of bitcoins, you have to buy a lot of computing hardware, run them using a lot of electricity, and connect them to the internet with a lot of bandwidth. Of course, you can just buy bitcoins from people who have already mined some. At the time of this posting, you can buy 1 bitcoin for 550 US dollars in the open market.

You might be thinking: Why is this such a big deal? Remember, one of the key powers of computer technology is that bits and digital information can be easily copied and duplicated, which many media companies know all too well. But forget media companies, duplication is a fatal problem for financial assets to have. Credit card companies and financial institutions spend huge resources on security and fraud prevention, making digital transactions very slow and very costly. With Bitcoin, we now have an easy and low-cost way to create bits that cannot be duplicated. And as I’ve alluded to, Bitcoin is just one implementation of a crypto-currency protocol: We can easily create other crypto-currencies similar to Bitcoin by simply changing some of the underlying rules of the protocol (and people have, such as Litecoin and Dogecoin). So when I talk about Bitcoin, I am really talking about crypto-currencies, and more generally the blockchain, as a technology where “Bitcoin” is just one implementation. It is like talking about paper currency as a technology, as opposed to Dollars or Yen.

Now to be clear, Bitcoin doesn’t actually stop the duplication of bits, it simply tells us who owns the bits (remember that it is impossible to rewrite the transaction history of the ledger). But for the sake of economic analysis, this distinction is not important: Economists can simply think of the protocol as telling us how to create bits that cannot be counterfeited. Bitcoin, or the blockchain in general, facilitates many applications, not just as a currency. For example, you could imagine using a Bitcoin-like protocol to trade shares in the stock market: you simply assign one share for one crypto-unit. Trading stocks then becomes very easy and without the need to have a broker (or pay their high fees). The creation and trading of options and other derivative contracts also then become seamless, transparent and very low-cost. The blockchain in general can be used to store bits of information where the ownership of those bits is well-defined, but that’s an application that monetary economists need not worry about. I hope you truly grasp what a powerful technology Bitcoin and the blockchain are. It is also important to notice that the protocol doesn’t tell us how to apply it or what to use it for. It especially doesn’t tell us what the value of bitcoins are. Bitcoin is simply a tool — who knows what other applications are out there.

Also a note on anonymity: Bitcoin is touted for its anonymity, but this is not accurate. Every single Bitcoin transaction is recorded on the public ledger. If someone can find a way to associate you with your Bitcoin address, they will know every single transaction you have ever conducted. In a sense, Bitcoin is the most transparent financial instrument ever. Of course, you could create multiple Bitcoin addresses…

So there we have it, that’s what Bitcoin is. It is a way of transacting digital bits which cannot be counterfeited. That is a very important quality for money to have, although not the only one. I will soon explain.

This is Part 1 of a discussion on the economic consequences of Bitcoin. You can access the remaining parts here:

1.  A Friendly Introduction for Economists to the Bitcoin Protocol
2.  A Monetarist View of Money and Bitcoin
3.  A Brief History of Paper Currency and Central Banking
4.  Will Bitcoins Ever Become Money? A Path to Decentralized Central Banking